September already?! Okay, if you say so. Wow! We still have a lot of days to go before we’re done with this year and here’s what I have lined up for you.

San Diego ComicCon 2019 has come and gone. We had a great show thanks to Robyn’s careful planning and the immeasurable help of our teammates, Fernando and Mike. The four of us are like a band now, and that’s a good feeling. So my hat’s off to my Abstract Studio band and here’s hoping we have many more adventures to come.

Some changes this year in the show:

The DC booth was gone. It was always across the aisle from us, a large pavillion that fans strolled through and met their favorite creators. I heard that it was moved to the WB booth on the other side of the room but I never got a chance to go see it. We share our endcap space with Cartoon Books and the new setup placed Scholastic, who publishes Bone, across the aisle from us. So I thought the new layout was good for both of them.

The crowd was noticeably lighter during the week, inside the halls and out on the streets. Everybody noticed it. There were fewer Hollywood promotions that usually canvas tha area, like the elevators in the Omni were not wallpapered with some hot show imagery, and that’s been the case for a number of years in a row. I really didn’t see it pick up until Saturday and Sunday, then it was the usual shoulder to shoulder crowd.

Even with the lighter crowd, we had a good show. I sold a lot of sketches and books. We did something new where I would record a timelapse video of drawing a sketch then post it on Twitter. The first person to come to the booth and ask specifically for that sketch got it for $100. I did one of these in the morning signing stint and another in the afternoon.  I think people enjoyed it but it drove a few folks crazy who saw the tweets but weren’t at the show. If a sketch wasn’t claimed the same day, I raised the price to $1,000,000. Unless you asked for it by name. All told, I sold maybe 8 of these and several were discounted from millions to the promised $100. It really pays to be in the know at these shows. Follow those Twitter updates.

So we’re back home now and FIVE YEARS #3 comes out next week. I’ve been off the book for 2 weeks dealing with SDCC and now I have to make up for that so I’ll be drawing like a honey badger! Thanks to everybody who came to see our band at SDCC. We’ll see you again next year!

Here’s one of the timelapse sketches:  Timelapse Sketch Vid 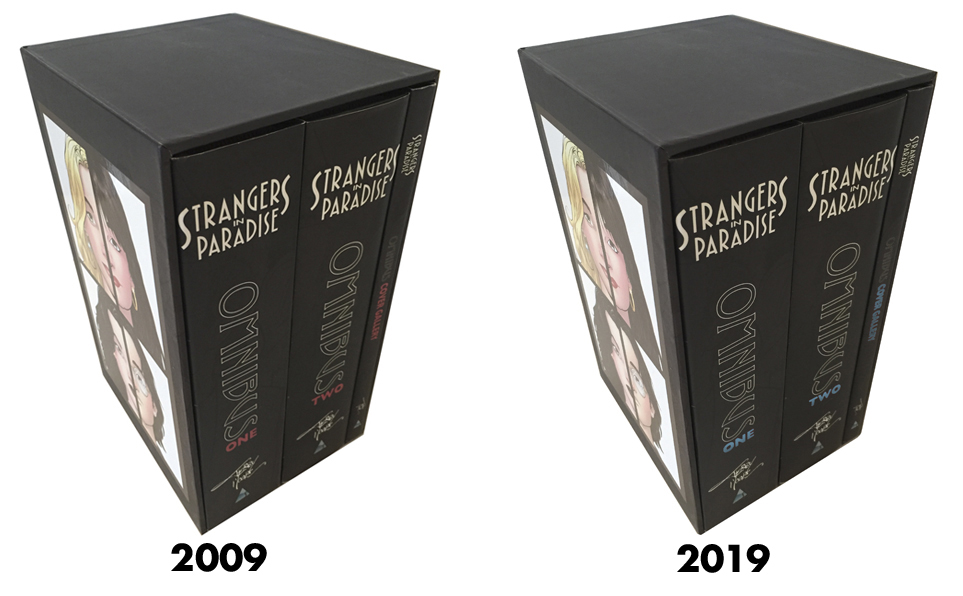 *Identical twins, with blue numbers on the spine for 2019.
*One printing only.
*We’re not reprinting it again, the bill is too scary.
*Ships November.
*PreOrder on our webstore. When it’s gone it’s gone.

Five Years issue 2 is out now and available at your local comic shop and on Comixology. This one finds us in freezing cold Russia with Rachel and Zoe and things go swimmingly. The first issue was Katchoo and Francine in Hawaii, second is Rachel and Zoe in Russia… the third issue opens on Tambi, Julie and Ivy (Echo) in Washington DC. This thing is global! 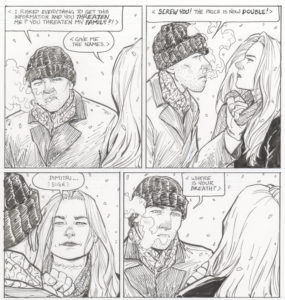 If you’ve read Five Years and like it, please help spread the word about the series. Online support is a powerful thing. The more people that read the books, the longer I can keep doing what I love most, making comics! 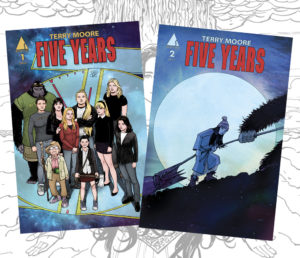 At the moment I am working on issue 3 and getting ready for SDCC, which means drawing sketches. We always take original art to sell at SDCC, and I also like to take pencil sketches that are more affordable than the inked story pages. Plus, they give me a chance to draw different ideas and that’s fun for me. 90% of the sketches are my characters, but there might be a few different things in there too, like this sketch of Red Riding Hood, rancher Katchoo and… something you probably shouldn’t be looking at. 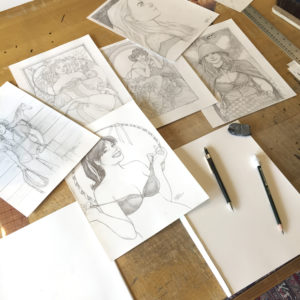 Something new up top:  we’ve added a video tab on the top of this home page. Click it to see new videos and timelapse captures of drawing and inking. Only four up at the moment but I’m looking forward to making more now that I have somewhere to put them. 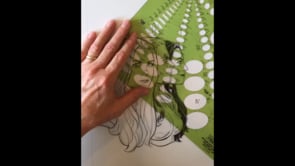