I’m very excited about this! Diamond knows my catalog and they know the book market. Put all that together and the future looks bright!

To hear Robyn’s explanation and what is planned for 2023, watch the first 5 minutes of our recent Studio Sunday here.

Read Diamond’s official statement below and add exclamation points in your head because this is wonderful news. (!) 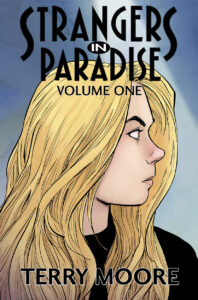 Diamond Book Distributors is pleased to announce that it has signed a worldwide distribution agreement with Abstract Studio to exclusively distribute their books to North American and international book markets, as well as libraries. Distribution to the comic book specialty market is handled exclusively by Diamond Comic Distributors.

Under the banner of Abstract Studio, Terry Moore has been publishing his groundbreaking comics and graphic novels for almost thirty years. His seminal work, Strangers In Paradise, carved out a unique space for him in the world of American comics. Originally published in 1993, when The Death of Superman and other superhero titles were dominating comic book sales, Moore set out to explore a different narrative with Strangers in Paradise, one that would eventually be termed “slice-of-life dramedy.” The story centers around the lives of Francine and Katchoo, a pair of twenty-something best friends who eventually fall in love. The fan-favorite series features romance, action, intrigue, and Moore’s signature humor.

“Having worked closely with Diamond Comic Distributors for almost thirty years, I know that Diamond Book Distributors is the perfect partner to bring Strangers In Paradise to bookstores and libraries around the world,” said Terry Moore. “I’m looking forward to working with the great team at Diamond to introduce my books to a new generation of readers.”

Strangers In Paradise was in publication for fourteen years, during which time it received great critical and commercial acclaim, including wins for an Eisner Award, a Reuben Award, and a GLADD Award for Best Comic. Terry would follow it up with Echo, Rachael Rising, Motor Girls, Serial, and the more recent Parker Girls. With consistent, thoughtful, and innovative storytelling, Moore has built a devoted following in comic shops.

“I first met Terry and Robyn Moore back in the early 2000s when they were exhibiting at an ALA (American Library Association) Annual Conference. This was a time when graphic novels were just getting a foothold into libraries and bookstores,” said Rich Johnson, Vice President of Sales and Business Development at Diamond Book Distributors. “It was a new category and in some ways Terry’s slice-of-life books were ahead of their time for these markets. The time is finally right to introduce Terry Moore to a new audience.”

“I’m proud that Abstract Studio has chosen Diamond Books to be its partner in bringing out new editions of Strangers in Paradise,” said Tony Lutkus, President of Diamond Book Distributors. “Terry’s storytelling is beloved, timeless, and always groundbreaking—Strangers in Paradise is one of the few series ever to have won GLAAD’s Outstanding Comic Book Award multiple times. Terry’s outstanding works deserve to be found on bookstore and library shelves everywhere.”

Strangers In Paradise Volume 1 will be published with a new format and cover in June 2023, with Volume 2 releasing in October 2023.