Time to remind you the infamous Strangers In Paradise Omnibus is being reprinted and shipping in early November—wow, that’s not that far off—and you can preorder yours now to get the exclusive print. This is the deluxe hardcover box set that includes two 1100 page books containing every page I made for SiP from 1993 to the series conclusion in 2007. This includes the off-shoot stories like the Xena parody, Molly & Poo, Freddie’s super-hero dream issue, Francine & Katchoo shopping at the mall… just lots of fun outtake stuff that was made over the years. It’s all in there. Some of it is in color because I decided black and white characters dream in color. You get to do things like that when you’re an indy cartoonist and don’t have to talk your editor into it. 😉

I have to tell you, for sure this is the only reprint we’ll ever make. The cost is too scary big for an indy pub. But the first printing sold out within a month in 2009 and people have been asking for it ever since so this reprint was important to us. The new edition is identical to the original except for one identifying tell: the red ONE and TWO and COVER GALLERY on the covers has been changed to blue. That’s it. The rest is the same. If you missed out on the first printing, this is your chance. Don’t miss it twice!

Here is the link. Check it out and join the Omnibus club. Once you have this 12 pound beast in your hands, you’ll be glad you did! 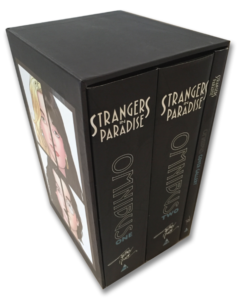