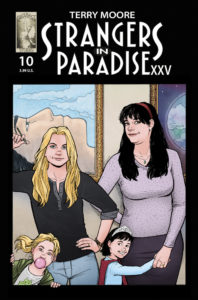 Strangers In Paradise XXV issue 10 comes out tomorrow (Valentine’s Day Eve) and brings this one-year story to a frightening conclusion. I can’t say much more than that until it’s been out long enough for you to read it, but let’s just say if I fall off a cliff and don’t write the next series, you’re going to be very upset with me. Why? Because the end of SIP XXV has a terrible revelation that affects not only the SIP characters, but all my characters in all my books, aka The Terryverse! The ending begs for the story to continue, one way or another. And I’m happy to tell you—Spoiler Free—that it does. I will announce the new series next week, after everybody’s had a chance to read XXV 10 and digest the story.

So grab issue 10 this week. You have to read it to know why the next series is a mega bombshell!

When I finished issue 10 a few weeks ago, I left the next day for France. In Paris, I did some interviews at the offices of my publisher Delcourt and a wonderful public interview alongside Charlie Adlard (The Walking Dead) at one of those beautiful old buildings on the Seine. Then we took a train to Angouleme and I got to meet the French fans and creators face to face for three days. It was a great week, punctuated by delicious food and good times. Everybody was so kind to me and when I thought about it and looked around me I noticed it was just that way at the show… and on the streets of this little town. They allow the show to completely take over the town and I never saw a local who seemed to mind one bit.

I found some great books and decided they were so good they were worth lugging home in my backpack. Also, I was fortunate to sit for a major photographer for a portrait, my first ever by a serious pro. That’s me below, in such rare focus that I can’t hide a single flaw.

Glad to be home. Happy I was able to complete the SIP XXV series. Looking forward to starting the next series immediately. Details on that next week!