A Strangers In Paradise Movie… Yes!

The Hollywood Reporter broke the news today and it’s official. I’m teaming up with my director Angela Robinson to adapt Strangers In Paradise for the big screen. More details to come later. Today I’m just thrilled to be able to make the announcement! Here’s the HR link, and the official announcement: 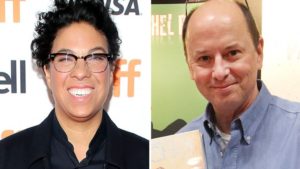 Writer/director Angela Robinson (Professor Marston and the Wonder Woman) is teaming up with award-winning cartoonist Terry Moore to adapt his long-running graphic novel Strangers in Paradise for the big screen.

Strangers in Paradise is a romantic comedy-of-errors that follows Katchoo, a young woman in love with her best friend, Francine. When Katchoo meets David, a young man determined to win her affections, she finds herself thrown into a love triangle between the two suitors. Things only get more complicated when Katchoo’s former employer comes looking for her and $850,000 in missing mob cash.

“I’ve been wanting to adapt Strangers in Paradise for over a decade, since the first time I read it and couldn’t put it down,” Robinson said. “Terry Moore writes real female characters with such breathtaking sensitivity. With Strangers in Paradise he pulls off the nearly impossible — a sexy, stylish crime story with tons of heart. I look forward to our collaboration!”

The comic first debuted in January 1993, and received the Eisner Award for best serialized story in 1996 as well as the GLAAD Award for best comic book in 2001. It is, and has been, written and drawn by Moore since its first issue.

Robinson’s latest film, Professor Marston and the Wonder Woman, covers similar ground in telling the true story of William Moulton Marston, the creator of Wonder Woman, and the polyamorous relationship between his wife and mistress. The film stars Luke Evans, Rebecca Hall, and Bella Heathcote and premiered at the 2017 Toronto International Film Festival. It will be released by Annapurna on October 13.

“Angela and I have known each other for years and I greatly admire her creative vision,” said Moore. “From day one our common goal was to bring Strangers in Paradise to the screen. It’s a complex story that took years to write and Angela gets it on every level. I can’t wait to get started!”

Robinson and Moore are both represented by WME.